About the achdus club series

The fourth-grade girls at Yeshivah Bais Naomi face life's challenges with friends at their side.
​

As the new girl at Bais Naomi, Hili Rosen hopes for a fresh start. She meets the fun-loving Green twins, Tova and Shulamis, and things are looking up — but not for long. The rest of the class isn’t friendly at all! Did Hili make a huge mistake by switching schools?

Ruthie Somerfield is the undisputed queen of class 4B. The girls all put up with her bossy ways until one day, she makes a mean comment that goes way too far. Things go from bad to worse as the class splits up and girls start choosing sides. Will Hili’s dream of a school where everyone gets along, ever come true?
​ORDER NOW 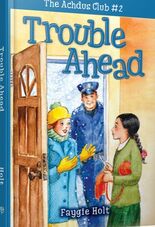 Ruthie Somerfield is struggling to make things right with her classmates, but that means spending time with her elderly neighbor, befriending the new girl at school, and dealing with some big changes at home.

More on Trouble Ahead:
Tova and Shulamis Green are back! Following their super Achdus Club party that brought class 4B together again, the two sisters and their friends are planning the club’s first-ever chesed project. Elderly Mrs. Golding would love the company—so what could possibly go wrong?
Ruthie Somerfield has been acting weird and coming late to school. Her family’s problem is wearing her down, but she won’t share what’s really going on. Can a monster storm force Ruthie to forget her fears and do what’s right?
​                                         ORDER NOW

​
Shulamis knows her twin sister Tova is keeping a secret, and she's determined to find out what it is. When an accident separates the twins fro the first time ever, can they find their way back to each other? Will the rest of the Achdus Club have to choose sides or can they help the heal the rift between the Green twins? In this much-anticipated sequel, a determined group of fourth-graders plan their most important mission yet. 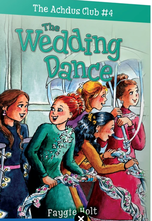 
​Achdus Club member Shoshi Miller is a talented dancer and has been asked to join the school’s middle-grade dance team. If she joins the team, she will be the first fourth-grader ever on the team! The only problem is Shoshi’s grades, which need major help. Can she succeed at school without sacrificing her love of dance?
Meanwhile, Achdus Club founder Tova Green is still dealing with the after-effects of being hit by a car a few weeks earlier. Now her favorite teacher is getting married and Tova is refusing to go!
ORDER NOW 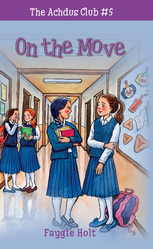 Ruthie Somerfield’s family must leave their large, spacious house and move into a small, cramped apartment. Her new bedroom is tiny, she has to ride the crowded, noisy school
bus, and she misses her familiar neighbors. And if anyone finds out about it, she’ll be so
embarrassed! Will Ruthie ever be happy again?
​
Meanwhile, Purim is coming, and that means one thing: dressing up! Shulamis Green wants her costume to match her twin sister, Tova, but Tova has other ideas. Will Shulamis understand, or will she feel that Tova’s letting her down?

ON THE WEDDING DANCE:
"Bais Naomi's fourth graders struggle to prioritize when faced with conflicting values. Shoshi, a stellar dancer, has the chance to do what no fourth grader has done before: perform in the eighth graders' dance program. But, while dancing comes easily to her, Shoshi struggles with schoolwork and her parents say that she cannot dance unless her grades improve. Meanwhile Tova Green chafes at unwanted changes, from the departure of her favorite teacher, Morah Steiner, to the unwanted attention caused by her injury in a recent car accident. Will Tova's anger and frustration stop her from dancing at Morah Steiner's wedding? And can the whole Achdus Club crew find ways to support one another and give back to their community without taking on more than they can handle? This slim, highly readable chapter book tackles a surprising number of issues with admirable depth. Holt efficiently recaps characters' struggles from previous books, then gracefully integrates them into the ongoing plot. With protagonists' refelctions, Holt creates space for readers to question stereotypical Jewish values like the prioritization of academic success over other endeavors. The Achdus girls periodically disagree with their parents or mistrust their teachers, but family remains central and educators ultimately celebrate students' talents and recognize their diverse learning needs. A handful of Hebrew terms are interspersed without translation, in keeping with the Orthodox school setting." -- Rebecca Fox, children's librarian II, Boston Public Library, in Association of Jewish Libraries News and Reviews, September/October 2020
Proudly powered by Weebly